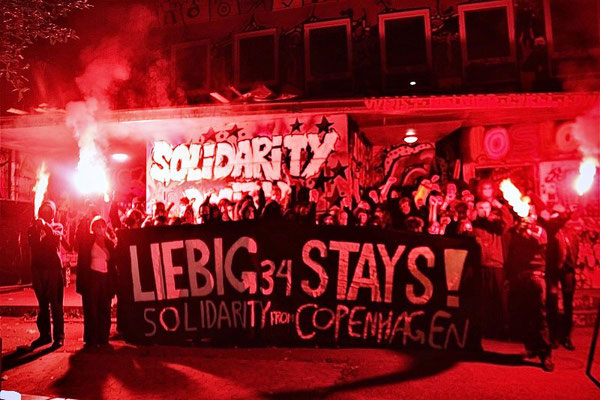 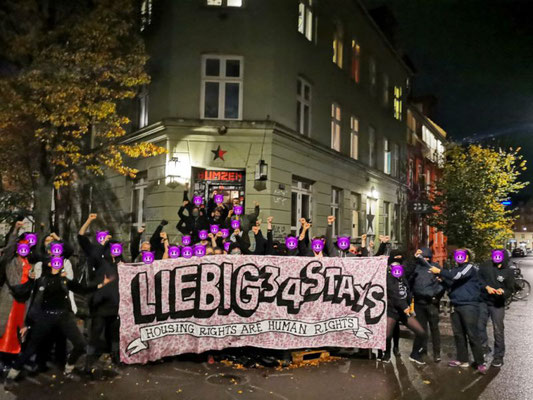 Ungdomshuset og Bumzen: “From Copenhagen we send our support and solidarity with the fight against gentrification. Defend autonomous spaces in every city!” (Forstør ved at klikke på billedet) 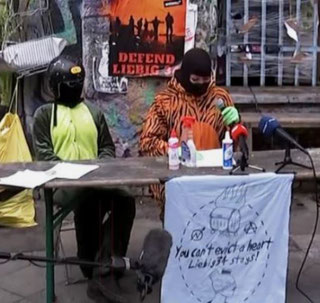 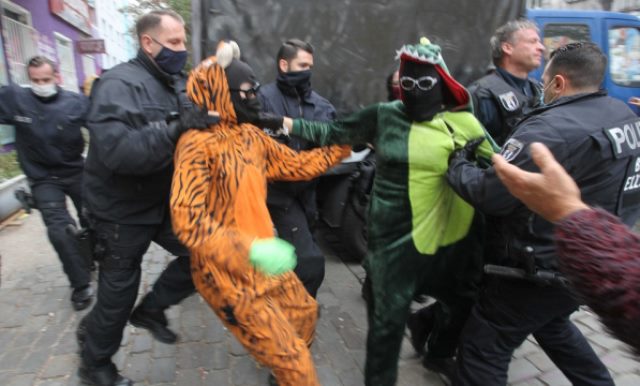 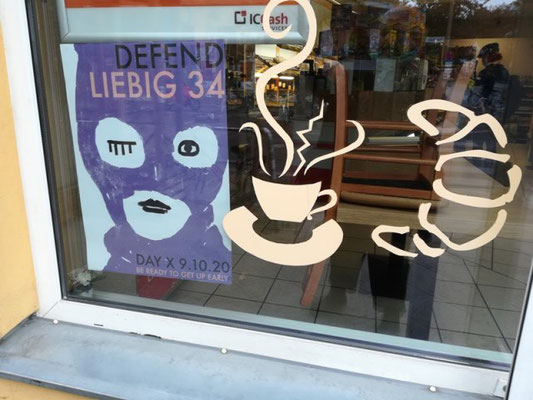 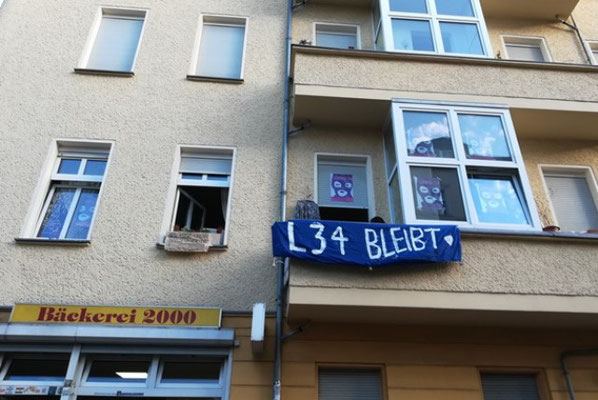 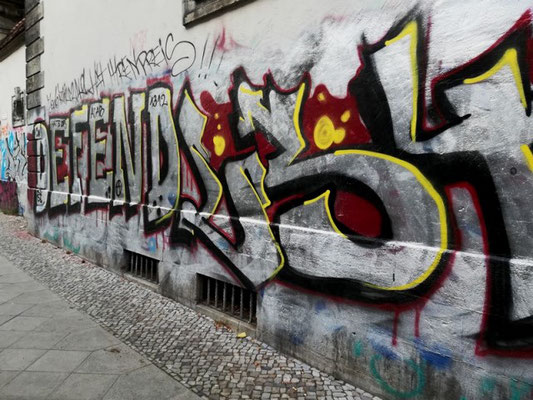 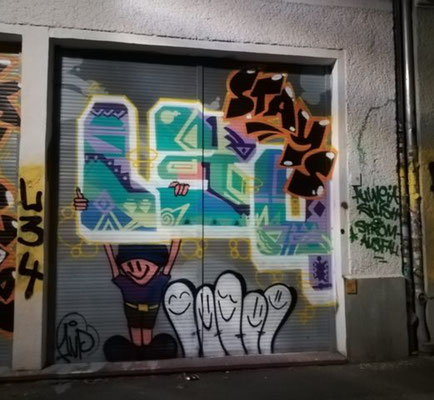 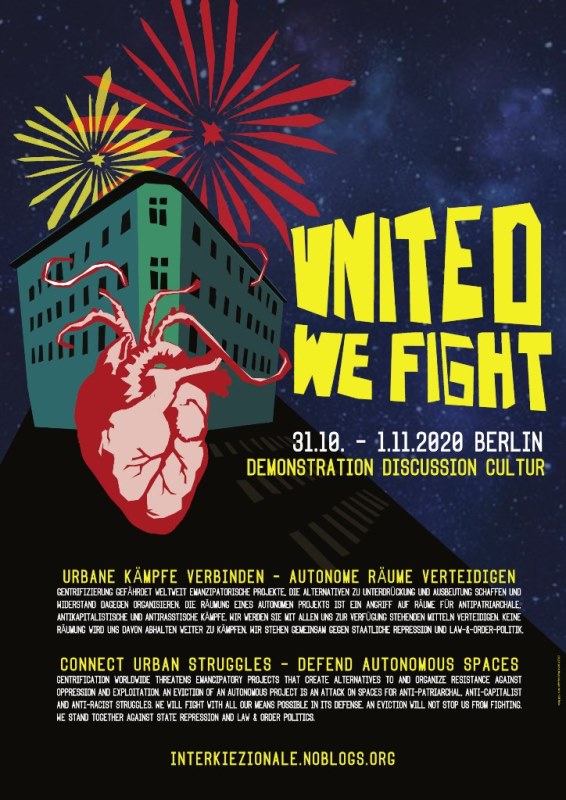 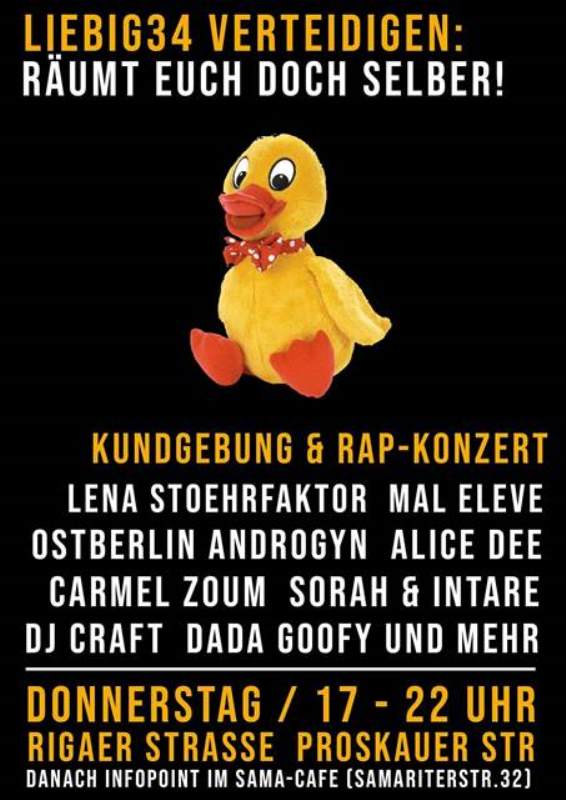 The anticapitalist struggle is an intersectional one. Liebig34 provides a perfect example. In their fight against housing being a commodity, capitalism and patriarchy, they have been a symbol for radical queer feminism for 30 years.
Now, the project is faced with the threat of eviction. Being the valuable and inspiring project that Liebig34 has been, it cannot be taken away. Liebig34 stays! This interview serves to provide an insight into the immense value of Liebig34 and hopes to encourage action and solidarity.

Liebig34: Liebig was originally squatted on June 30th, 1990, the summer after the fall of the Berlin wall, where many buildings were left empty. The house sits on the corner of Rigaer Straße, a place particularly known for its squatting history. In 1999, liebig then turned into a women-only and lesbian space.
Over the years and adapting with the times, liebig became more inclusive towards non-binary and trans people. We now define it as an anarcha-queer self-organized houseprojekt, living without cis-men, but all other (a-) gender-identities welcome.
So to put it more simply, no more TERF bullshit tolerated in our home! Liebig’s one of the few hausprojekts (the name for legalized squats in Germany) where cis-men do not dominate the conversation of our leftist space. It’s a space for us to empower one another with a DIY mentality.

Liebig is self-organized both politically and practically, whether that be projects and maintenance, and learn from each other by having political conversations and with learning new skill sets.
You didn’t have to be already integrated into the Berlin leftist-scene in order to join the collective, so despite the exclusion of cis-men in our home, it has been arguably one of the more inclusive hausprojekts for this reason.
Liebig has had so many generations living within its walls, with thousands of people of different backgrounds, languages and cultures. Most importantly, Liebig34 has served as a refuge to people wanting to live outside the confines of our patriarchal capitalist society. Simply the need for a space like this is the most important reason

why it has stayed alive over all these years.

Liebig34: When Berlin went practically bankrupt in the 2008 economic crisis, it sought to sell the hausprojekts which were owned by the city at that point, and if the residents weren’t able to buy their own home, it was then sold to property investors. In Liebig’s case, this investor is Padovicz, a notorious slum lord of Berlin, owning about 200 buildings in Friedrischain alone.
Our contract with him ended December 31st, 2018, and since then we had been living in a limbo of uncertainty, with a threat of raids or surprise evictions at any moment, and many arduous court dates in between.

Our house, because of constant cop presence and threat of raids and random searches in the “danger-zone” of Rigaer Strasse, we can no longer be a safe space for people, which is something we once prided ourselves being able to do.
We no longer have our guest-room, which was one of the few places in Berlin hausprojekts still so open to people in need. We’re now constantly working in preparation for our eviction date, which is October 9th.

We unfortunately have not been able to have any solidarity parties in our bar since COVID-19, which was our main source of financial support for legal and repression costs. We’ve started to do kufa (kitchen for all) dinners again in a corona-safe way out our bar window.
This is important for the community to not only bring people together and provide hot meals for those who can’t otherwise afford it, but also as opportunities for people to support us through donations.

Liebig34: Our eviction date is now October 9th, and we are working persistently and hard as fuck towards the countdown. We will certainly not go down without a fight! We now spend most of our time preparing for our eviction date, and when you’re in this survival mode it leads little room for a community to thrive.
However we still make sure there is room to support each other on emotional levels, and still enjoy coming together for meals, projects, and celebration. After all, this is our home, and we want to maintain some degree of comfort with our last moments inside it, eviction or not.

Liebig34: As briefly mentioned above, Rigaer Strasse was declared a “Danger Zone” in 2015, giving the police more leverage over people’s rights in the area, where they can search and detain people at their will. The cops always show up to linger on Dorfplatz (village square) right in front of our house often in full riot gear for any little event or gathering.
In 2019 there became “Operation Nordkiez” which installed a special unit of cops that are volunteers for especially this kind of “Danger Zones”. The Politically Motivated Street Violence Police Unit (PMS) went also into the street to keep track of the anarchist spaces with undercover cops patrolling the area.
They constantly spy on the street and the collectives, labeling us as radical leftist terrorists as a tactic for justifying the violence they impose on the community.

Liebig34: The house has been subjected to many attempted Nazi-attacks over the years, and every time there is a fascist manifestation there are many threats directed towards Liebig 34.
The most recent major event in Berlin was where fascists and COVID-19 deniers came together from across the country August 29th, and once the demonstration of 20,000 people were dispersed we knew we needed to protect the house. What was pleasantly unexpected was the impressive community turnout, who came to support us on Dorfplatz and we knew we were not alone.

Liebig34: While one of our many self-proclaimed slogans is “Loud and Dirty,” many people of the local community acknowledge and appreciate our house as a symbol of resistance against gentrification.
We stand for more than just a living collective, but for the genuine Berlin that investors are actively trying to clean up and wash out. Between Berlin’s past fight against Google, and Berlin’s current fight against Amazon, Liebig has served as a symbol for anti-gentrification in the past few years.  (We don’t include the luxury apartment complexes on Rigaer as part of the community, however they obviously don’t like us.)

Liebig34: We often say the phrase “One Struggle, One Fight” when talking about the autonomous spaces often in danger across Berlin. And since this year there has been so many institutional attacks on these spaces the time to come together has been so much more important. Syndikat, Potse, Drugstore, Meuterei, Rigaer 94, DieselA, and Kopi are just some of the spaces that have been either raided, evicted, or are in major threat of obsolescence just in the past year. While of course there are sometimes our political and personal squabbles with each other across different spaces, we know our common enemy is the Police and the State, who want us to be divided and feel alone. We share this common fight in defending our spaces.

Liebig34: As many of us know, the patriarchy and capitalism are oppressive structures that work together to make the lives of women and queer people especially so difficult.
This house has always been anti-capitalist since 1990, but the need for its feminist and queer identity was decided by its inhabitants because leftist spaces can and do still perpetuate misogyny, homophobia, and transphobia.
We know Feminism and Capitalism cannot co-exist, no matter how hard pop culture attempts to integrate the two. However, no matter the economic hegemony, we all must constantly work to unlearn the bullshit the patriarchy, colonialism, and other cultural hegemonies have instilled in us.

Liebig34: If you’re in Berlin there will be several demos and events leading up to Day X, and a Protest the night of October 9th and also probably the day after, too. Keep updated with our twitter and check our blog!
If you can’t get to Berlin or support in physical ways, keep our fight in our thoughts and in your political conversations as a hope to continue this movement no matter how many places they try to evict!
Challenge the sexism, racism, homophobia, transphobia, etc. in all your leftist scenes! “Liebig Bleibt” is not only about us trying to keep our house, but to keep the spirit of our political goals and ideas alive in the hearts of generations to come.
______________________________________________
kilde: Green Anti-Capitalist Front: Interview with Liebig34 squat in Berlin as it resists eviction 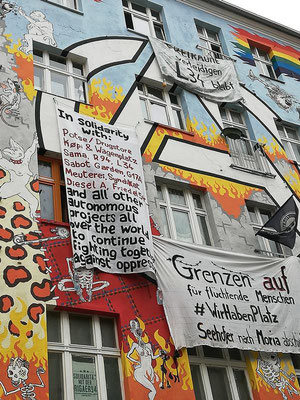 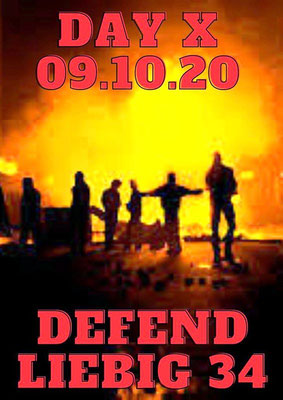 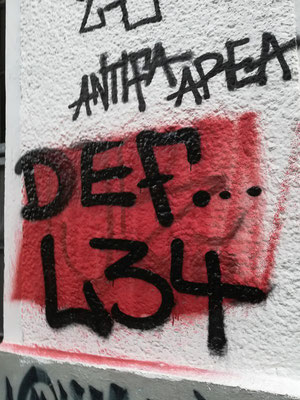